Was there a time when your kid was like this? 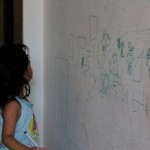 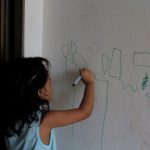 Yesterday, I was so busy doing my Saturday chores in the kitchen. I was so immersed in it that I totally forgot about my 2 little ones playing in the receiving area of the house.  When I came I saw Summer deeply engaged in writing and drawing…. “ON THE WALL!!!!!”. I was outraged. My mind was racing as to what to be angry about first, the act of vandalism or the fact that we would have to spend an unknown amount of  money just to have the walls repainted. I was about to open my mouth and getting ready for an all out rant but then when I saw how she was so into it I suddenly had the odd feeling and thought against it.  She was in deep concentration, much like a painter engrossed in their painting and entranced by the moment.

I did not want to interrupt her at that time with the fear that she might lose her “gusto” to draw.  I was holding my self, teeth gritting and just thought that I would just find another time to tell her about drawing on her sketch pad and not on the wall.

I remembered asking Summer once to “draw a face” one of our study times, she refused saying she doesn’t know how to draw one.  I did not force the issue.  So, when I saw these, I was surprised, amazed, happy, but worried by the fact that she finally drew… “ON THE WALL!!!”.

So, I took some pictures instead.

After which she told me who those drawings are. They are us.  I’m also glad that she drew faces with ears. My Psychology teacher in college told us, if you draw a face with ears, it means that you are a good listener.  Something that I am not, although I’m trying to be. LOL!

Then softly but with a stern face I reminded her that it would be nicer to draw on the paper or on her drawing pad than on the wall.  I did not put so much issue on the vandalism part because it might only make her do it more.

When you have something like this at home, how do you handle it?

Feel free to leave your comments or creative responses below! Cheers! 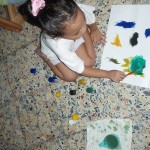 The More You SHARE the More LOVABLE You are!